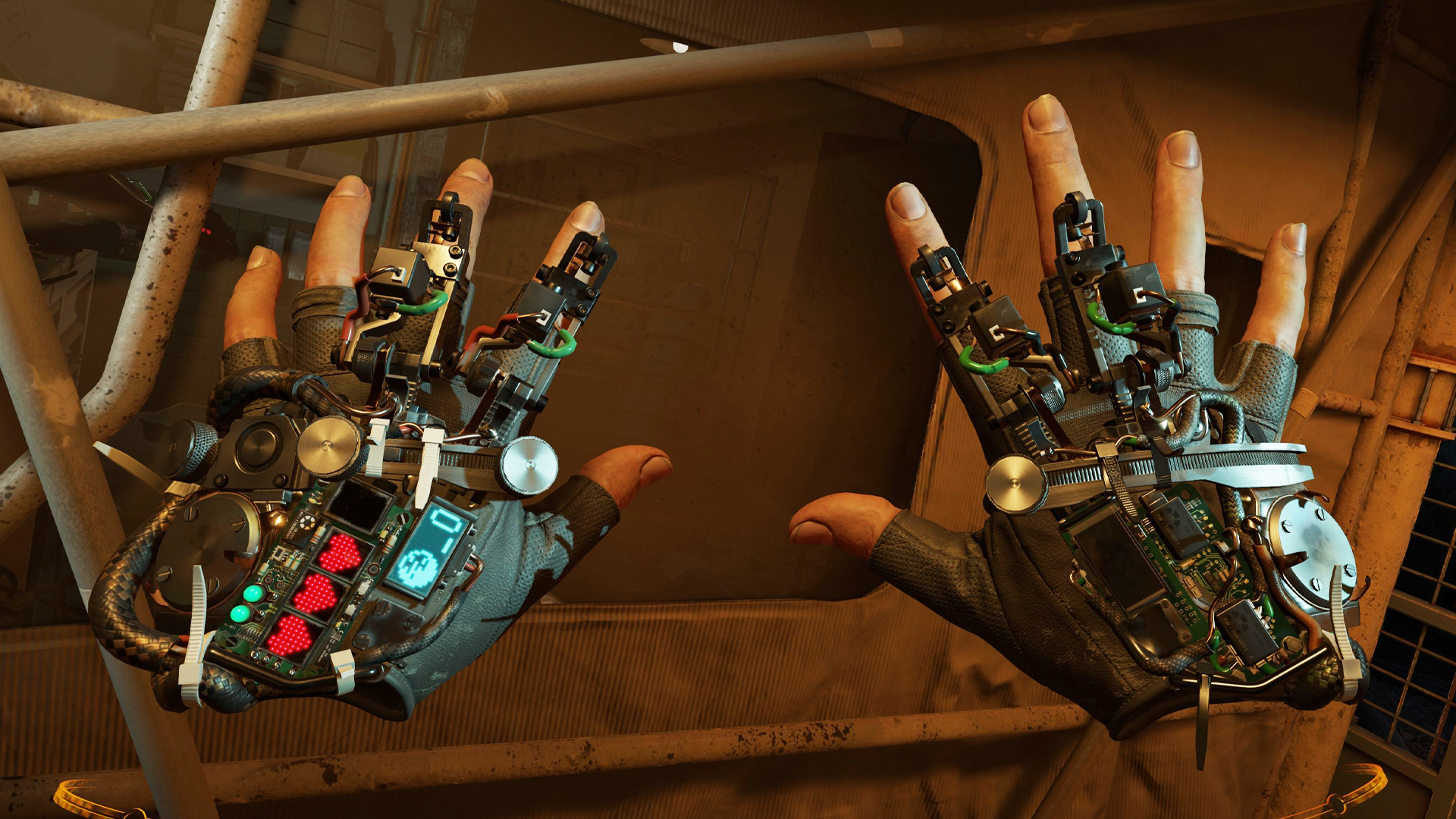 Find all previous editions of the PCG Q&A here. Some highlights:
- Have you made any close friends through online gaming?
- How do you name RPG characters?
- What's an old game you've come back to years later?

Almost a year ago we asked if Half-Life: Alyx made you want a VR headset. After an initial burst of interest inspired by Valve's game, the pickup rate of hardware may have slowed, thanks in part to the Index shortage. Now the Oculus Quest 2 is out, that's like to change as we see another step toward the normalization of putting your head in a sweaty pair of goggles for hours at a time.

Have you bought a headset in the last year, or are you planning to? Have you found anything to play after Alyx? Has Beat Saber made you any fitter?

Here are our hot takes, plus a few from our forum.

Wes Fenlon: I don't think it's too rare of an opinion, these days, to think that Facebook is bad for humanity. It's bad for mental health and politics and public policy that can be influenced by corporations of Facebook's size. It's not malicious. This is just what happens when the ramifications of technology far, far exceed what its creators foresee. But that brings us to Oculus, which benefits from Facebook's deep pockets—that's the main reason hardware like the Quest 2 is so cheap. I like the hardware, but I really, really dislike the notion of requiring a Facebook account to use it. It's not just a principle, because, sure, you don't have to actively use Facebook to have an account for your VR headset. But how much more integrated will Facebook and Oculus be in a few years? How will Facebook's social media aspirations, its desire to control personal data and how news is disseminated, factor into VR and AR?

Maybe that relationship will only become slightly more annoying and slightly more problematic and we'll just sigh and go along with it, adapting as we always do to things getting a little worse. Or maybe it'll be truly terrible! I just know every Oculus recommendation comes with a big caveat, now, and that's a real shame.

Andy Chalk: Somehow I'm actually less interested in VR now than I was before Half-Life: Alyx came out. I still haven't seen an influx of even remotely compelling VR games, and $400 (which is what a 64GB Oculus Quest 2 with controllers goes for in Canada), all due respect to Wes, is not what I would consider irresistibly cheap. And on top of everything else, Quest 2 rigs are inextricably tied to Facebook accounts, which takes them right off the table as far as I'm concerned. I don't have any particular beef with Facebook, apart from all the usual "ruination of society" stuff, but I recently had an unhappy experience with an Android tablet that was turned into an expensive coaster thanks to a lost Google account, and I have no desire to repeat that experience again.

Chris Livingston: It's a shame. The Quest really changed my opinion of VR with how easy it is to set-up and use, and the (relatively) low cost. It really felt like a big leap forward for VR, since most of my reservations are about how clunky and uncomfortable it is dealing with all the cables and sensors and plugs and crap. But like Wes and Andy said, it's a crushing disappointment that Facebook is going to be a requirement to use Oculus gear. The Quest 2 sounds like another great step forward in terms of tech, but being chained to a FB account is at least two steps back. Maybe in five more years the Index will be lighter, cheaper, cordless, and not need base stations.

Jody Macgregor: I'm going to be the sunny voice of positivity here because, while I sympathize with people's concerns about Facebook, I spent last night opening puzzle boxes with my robot hands in Gnog. Which was neat. Before that, I had a little workout by playing a few rounds of Beat Saber, and I plan to finally play Half-Life: Alyx soon so that I can experience what's apparently the game of the year that isn't Hades. I'm tempted to give Pixel Ripped 1995 a go as well to see how it twists old school game genres into this shiny new paradigm.

The library of VR games feels like it's got enough shelves to be worth browsing even if you don't care about Superhot—like there finally is something for everyone. It's about time.

Zloth: I got an Oculus back when it came out but had a terrible time with it. It *barely* fit over my glasses, making it extremely hard to put on or take off. It's really great when I got it on... until it steamed up and there was nothing to do for it but spend another 5 minutes taking it off. It didn't take me long to give up on it.

The effect is definitely great, though, and I see it as THE way to go for many types of games. Other types, like fighting games, really don't need the surround or head tracking part but could still benefit from putting everyone in 3D in front of you (3D Vision style). I consider VR/AR way more interesting than going from 2K resolution to 4K resolution.

badman: 2 Months ago I bought an Oculus Rift S, used, so I'm new to VR. But man...I still love it. I remember trying DCS. Just sitting on the runway in your P51 was unreal. Well, no, it was real. Very much real. For the first time in my life I almost felled like I was a fighter pilot, a missed childhood dream. If they are able to optimize those VR handgloves, I'll probably never leave my room again. VTOL VR is a better experience, if you want to use the VR controllers. DCS requires you to use a joystick (and mouse), the VR controllers are not really useable. I've never actually played Alyx, yeah...a shame, but I will in the near future. One last thing: VR is GREAT if you want to occupy your children :)

Rensje: Half-Life: Alyx was touted as VR's killer app but from what I hear it's fairly brief and has a few shortcomings of its own. It wasn't enough to tempt me into getting a VR headset. And even though I spend at least a few hours a day staring at a screen, I don't much like the idea of having light injected almost directly into my eyes from a pair of VR goggles.

I don't know. VR games still seem like glorified tech demos to me. Most aren't all that interesting and barely worth spending more than 5 minutes on. There are exceptions of course, and actual games aren't so few and far between anymore. Still, the financial barrier to entry is pretty steep. Or it was, anyway. Oculus Quest 2 is affordable and comes with inside-out tracking, which is the way forward. It's also wireless and works with PC on top of being a standalone unit. It's a lot of product for the price.

Just a shame I don't trust Facebook. Until they open up that particular walled garden they're not getting my money.

ZedClampet: VR is doing fine. Sure sales slowed during the slow season, but they are going to pick back up now that Christmas is around the corner. A huge percentage of retail on items like this takes place around Christmas. Also, most headsets were out of stock for a long time due to the surge.

My only complaint right now is the emphasis by game developers on shooters, which is by far my least favorite kind of VR game.

But with Christmas right around the corner and the Quest 2 being affordable, this will probably be the best season for VR yet.

What PC Gamer needs to realize, though, is that the Steam hardware survey only picks up a fraction of the PC VR users. Besides the fact that there are a lot of Oculus users who don't use Steam, there are also a lot of misses with the survey. It basically never registers my VR headset, and I've had VR since the beginning (and use it on Steam, too).

drunkpunk: I just got myself a Quest 2, it's my intro into VR. I always said that once it became affordable and I didn't need sensors around my room, I'm sold. So far I'm really impressed. It's a great little self contained device but works great with the link cable, too. I will say that to get the most out of it I had to buy the link cable, the fit pack, and the elite strap. But it was worth it. The elite strap makes it a lot easier to find that sweet spot and hold it firmly and comfortably. I've seen a lot of complaints about the black levels, but I guess having nothing to compare it to, it's fine. Playing Phasmaphobia was my first time getting truly immersed, and man it's something special. I have yet to jump into some of the major games like Half Life Alyx or Saints and Sinners (I plan on playing this over the weekend), but the few I have played were nothing short of impressive.