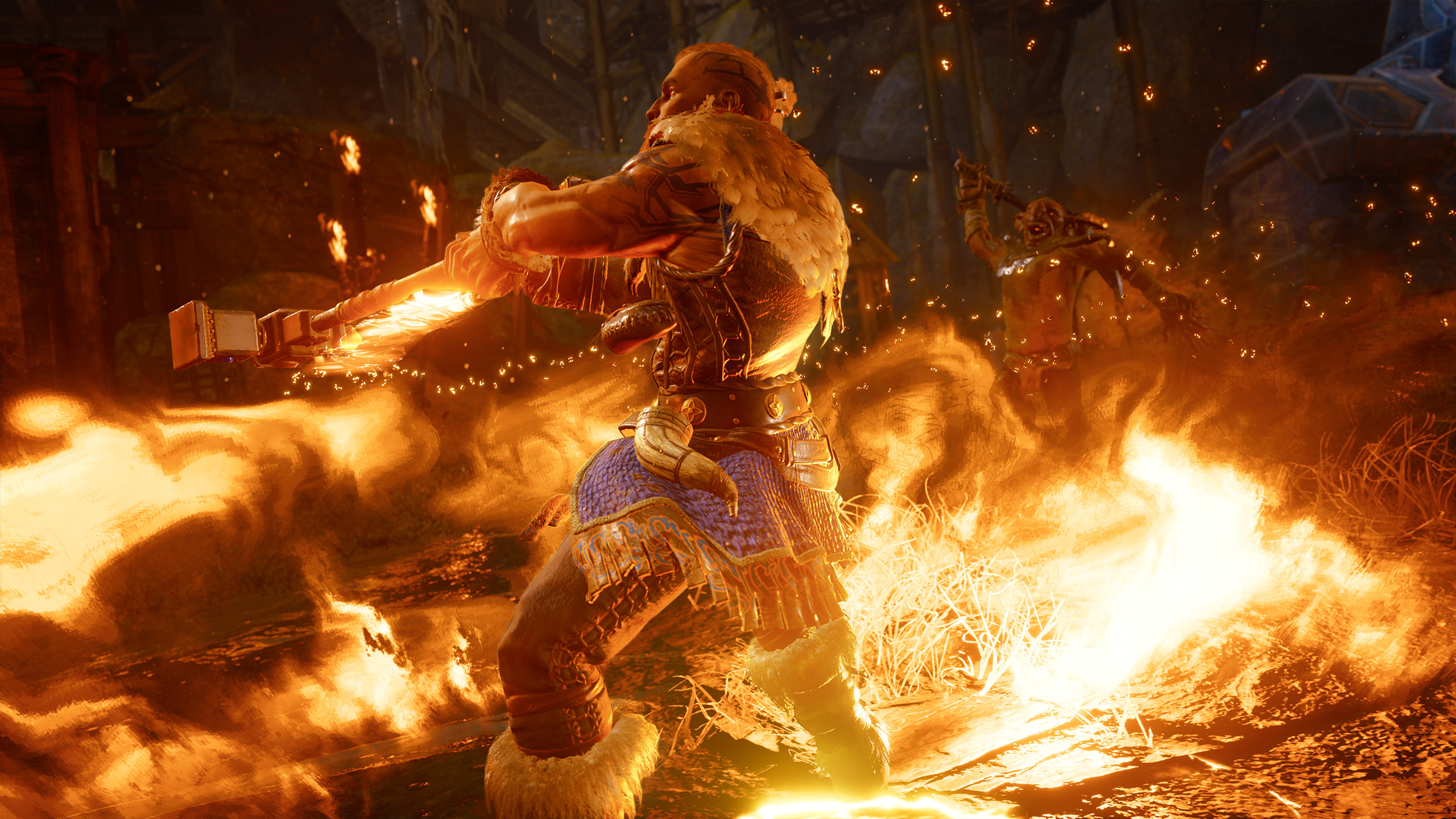 Wizards of the Coast interrupted its two-day programming for D&D Live last weekend to run a trailer for its latest game, Dark Alliance. Set more than 100 years into the Forgotten Realms’ past—1988, in Earth years—it’s a blast of nostalgia starring the unlikely ranger Drizzt, straight-talking archer Catti-Brie, gooey-centred dwarf Bruenor, and indefatigable barbarian Wulfgar.

For three decades, these have been D&D’s biggest personalities, starring in RA Salvatore’s bestselling novels and cropping up in countless PC games. But over the next ten years, you wouldn’t bet against the characters on either side of Wizards’ TV spot. Whether that’s Jack Black’s Barrolo, the enthusiastically-accented Italian dwarf determined to use his demonic powers for good (“He’s going to hell, but along the way he’s going to plant some flowers. Barrrrrrolo!”). Or Tiffany Haddish’s unicorn-straddling, deca-lingual high elf whose magic missiles carry a glitter payload, Tiffnicity.

Daft though they may seem, the next generation of beloved and enduring D&D characters will be crafted live on actual play streams like these. It’s already happening, and you can expect to see them filter slowly into videogames in the coming years.

There’s a natural lag built into the design of D&D games on PC, derived from the age of their developers. Today’s game directors grew up with Drizzt’s paperback adventures through the Underdark and Icewind Dale, and that history is reflected in their pitches and creative choices. On multiple occasions, RA Salvatore has been invited to contribute quests and plotlines to D&D games—each time lending his cast for cameos that contribute a sense of connectedness, tying player adventures to a larger Forgotten Realms universe.

To an extent, this fixation on the same characters and backdrops has been self-reinforcing. Salvatore’s vivid picture of the Ten Towns in the ‘80s led Black Isle to create Icewind Dale in the ‘90s, which in turn provides its own dose of nostalgia to power Dark Alliance. It’s been back-to-back mountains, like a packet of snow-tipped Toblerone.

But that trend is set to end. For one thing, the Forgotten Realms timeline has advanced significantly since Drizzt’s day: and, while Wizards has been amenable to developers setting their games in the past, those who want to stay current will have to abandon fan-favourite characters with sub-century lifespans to old age and death. What’s more, the traditional approach is out of step with the way D&D fans come to know and love characters today—not on the page, but on Twitch.

D&D has long been associated with the ‘80s, a link only strengthened in the public mind by Stranger Things’ breathless and earnest basement games of troglodytes and demogorgons. But it’s no longer true to say that the tabletop game’s heyday was decades ago.

D&D is bigger now than it’s ever been. In 2019, Wizards reported that sales of its starter sets had quadrupled. This wasn’t a wave of older buyers looking to recapture their childhoods, either: the majority of players are now below 30 years in age. Funnily enough, Wizards did grant Stranger Things partial credit (the TV series got its own dedicated starter set that year) but said that the primary driver of new players to tabletops was actual play shows.

For many of us weaned on digital D&D adaptations, which typically double down on combat and static lore, seeing the game played at the tabletop has been a shock. There, D&D is an imaginative prompt, a thought experiment in which players overcome problems in creative and funny ways, building out a world and characters as they go.

We’ve watched regulars in shows like Critical Role break free of social stricture and play unashamedly with fellow grown-ups, and that sense of liberation has been infectious. Hence the mounting sales of starter sets, which didn’t slow when the pandemic began. Perhaps because we’d grown used to watching D&D through a screen, the distance inherent to playing remotely proved little deterrent.

Yet viewers have stuck around to watch actual play shows even after starting their own campaigns, which suggests their appeal is more than vicarious. If anything, the success of Critical Role et al is proof that a semi-improvised story can be at least as gripping as a scripted one (particularly, it has to be said, if it’s played by professional actors). The characters and rules of the worlds devised for actual play have become valuable IP in their own right, as evidenced by the release of official D&D sourcebooks for Critical Role and Acquisitions Incorporated. Beyond the tabletop, Amazon Prime has ordered two seasons of an animated Critical Role series, The Legend of Vox Machina.

Acquisitions Inc, a Penny Arcade show originally played live at PAX, has developed its own tone of Douglas Adams-esque surrealism and corporate satire. Yet it still takes place in D&D’s default campaign setting, which creates the enticing possibility of characters crossing over into, say, the upcoming Baldur’s Gate 3.

For a glimpse at the future, look at Idle Champions of the Forgotten Realms, released on Steam last year. There you’ll find Drizzt and Bruenor, of course, but also Rosie Beestinger, the ancient halfling alter ego of D&D Live DM Kate Welch. And Evelyn Marthain, the paladin played with southern charm by Anna Prosser in Dice, Camera, Action. The bleed from actual play into videogames is underway.

There are downsides to tapping online personalities for D&D heroes, it has to be said. These are characters so closely tied to their creators that the two share a reputation. You can no longer find controversial YouTuber ProJared’s rogue, Diath Woodrow, in Idle Champions, for instance. It would be a surprise to find Diath in any subsequent D&D games either.

Yet some of these characters have already seen out their first half-decade of popularity, proving their longevity. Though their names and backstories can be silly, born from the natural comedy of the tabletop—hullo, Jim Darkmagic—history has shown that to be no detriment to success. After all: characters in the classic Baldur’s Gate games were drawn from a pre-Bioware high school campaign. The silliest, Minsc, was the underlevelled creation of programmer Cameron Tofer, and his hamster Boo an excuse to run around the battlefield while Minsc was unconscious.

Three decades on, Minsc is referenced in official D&D modules and stars in spin-off comics. To many, he’s as much the mascot of D&D as Drizzt and friends. Best not write off Barrolo just yet, then.

Crapshoot: One of the strangest Bible games ever, The Zoo Race