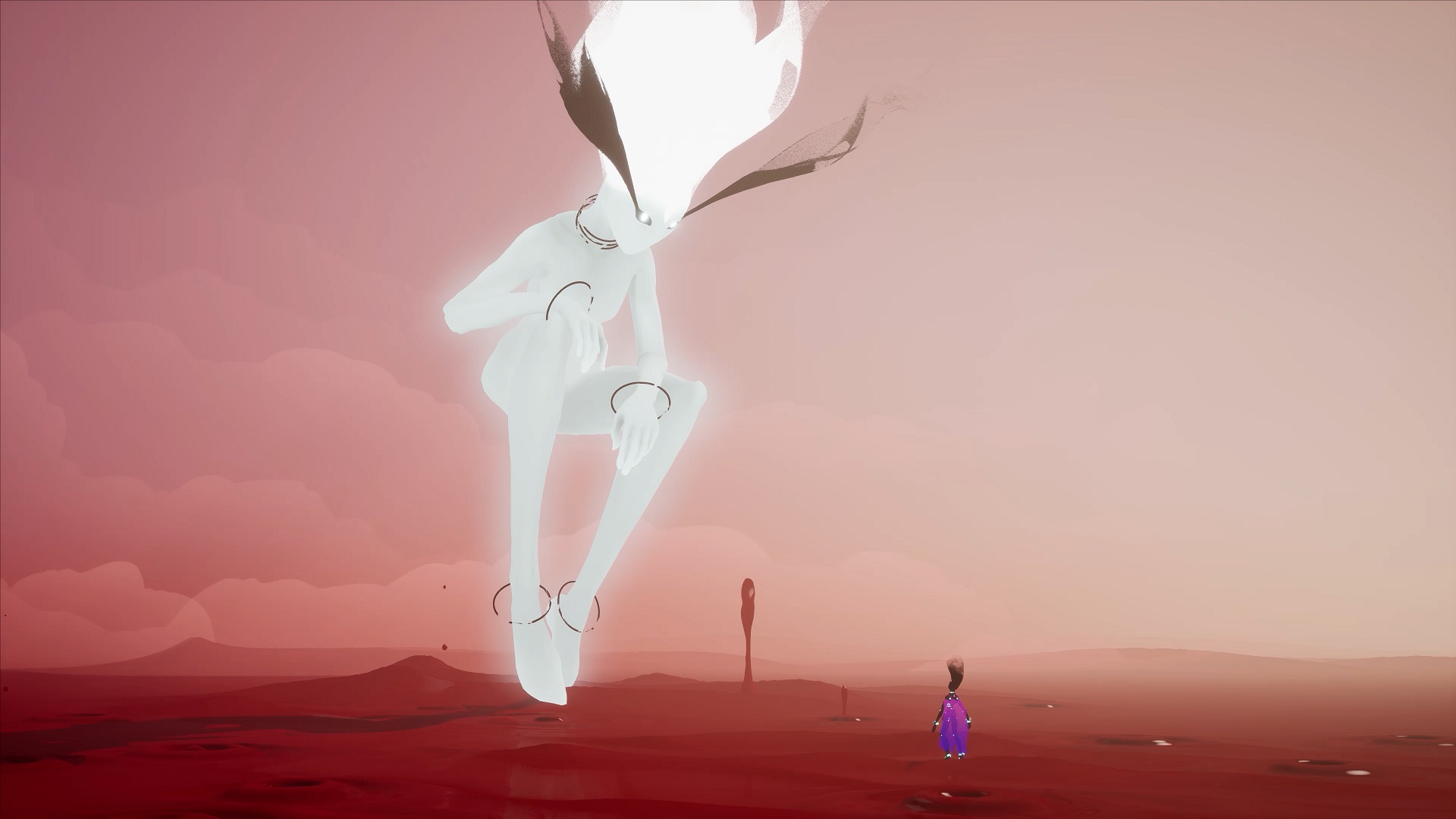 There's a moment, near the end of my recent hands-off preview of Solar Ash, where an inky black monster clambers over the moon and utterly fills the screen. Our protagonist, a 'Voidrunner' named Rei, dashes over the cracked shells that make up its hide, skating between weak spots like the boss was a level unto itself. It's at this point that Heart Machine founder Alx Preston says: "This is the smallest boss by an order of magnitude."

Solar Ash shares plenty with Preston's previous work, the beautiful and singular Hyper Light Drifter. Both feature dream-like pastel worlds, a haunting Disasterpeace soundtrack, and a fashion sense that heavily favours masks. But over the course of our demo, it became clear that Solar Ash is a vastly more ambitious project than its predecessor—and not just in terms of boss girth.

The biggest change is that shift to 3D, which Solar Ash makes full use of with a pivot to platforming. But it's a specific kind of platforming that really catches me, drawing from the fast, effortless traversal of Sega classics like Jet Set Radio Future as Rei glides across this surreal world—skating and dashing and grinding around ancient temples with effortless flair.

Combat still exists, but enemies are more roadbumps than full-on martial contests. Instead, Solar Ash's dungeons are more interested in traversal challenges. Our guide Mars Ashton slowly unlocks wings of an old tower by digging through back-rooms and underground catacombs for the gooey weak spots of these grotesque black growths that have taken over the structure.

The same thinking applies to the game's bosses. That giant, screen-filling bug is taken down by baiting an opening to jump onto its shell, sprinting across its bony hide to smack weak spots in a precise order before its carapace turns to lava. It's a knowing nod to Shadow of the Colossus, albeit a bizarre alternate version where Wander got really into inline skating.

Those quiet moments of exploration let us linger on how absolutely bloody gorgeous a thing Solar Ash is to behold. Hyper Light might have been a masterclass in pixel art, but its successor is something entirely its own—a surrealist world of pastel growths and towering mushrooms, where gravity is always subjective and nothing ever seems quite solid.

In part, that's because much of it isn't—Rei is often seen skating across seas of clouds, rendered with the same volumetric technique used by Media Molecule's Dreams to give the game's clouds a soft fuzz that flows and reacts to your movement with delightful physicality. There's a liquidity to the way Rei almost swims through the world that makes it feel oceanic, helped further by the coral-like structures that form this world (though Preston notes there'll be all kinds of biomes and sub-biomes beyond just mushrooms).

It's during these travels that Solar Ash feels most like Hyper Light Drifter, a game that dismissed writing entirely to focus on being a mood piece—every arena doubling as a vignette of some great tragedy, small loss or welcome intimacy. Solar Ash looks to still have that, but it also has more explicit storytelling in the form of a fully voiced cast.

Rei has agency in a way the Drifter never did. She speaks to people in a world where everyone is, in Preston's words, trying to "escape their own pain". She inquires her way through conversations (with traditional dialogue trees), forms poems, and can call on CYD—an upgrade-dealing companion who's described as "if your kind aunt was a holographic robot network". In the preview, we saw those upgrades used to rebuild Rei's health bar, bought with a goop-like currency that floats towards the player like drops of suspended blood.

In a moment, we see a broader map formed of bespoke named locations, each an expansive world full of secrets to explore. I can only hope that within this vast scale, Solar Ash doesn't lose the heart that, even after five years, still gives me goosebumps whenever I fire up Hyper Light Drifter. Even without words, Preston's debut was such a crystallised vision of trauma (drawn from a lifetime of often near-death heart problems)—and in our preview, the developer admits that the expanded scope of the team means Solar Ash by definition can't be as singular in its messaging.

Solar Ash isn't leaving that theme behind. This is still very much a game about a world and a people left scarred by disaster, and the gravity trauma can hold on you. But where the Drifter was dogged by his own pain and dealt with it by lashing out, Solar Ash looks to offer a world where disparate people can band together to pull themselves out of despair.

More power to you if you can escape said despair while pulling off some slick railslides off a centipede the size of a small moon. Solar Ash arrives on October 26 on the Epic Games Store.