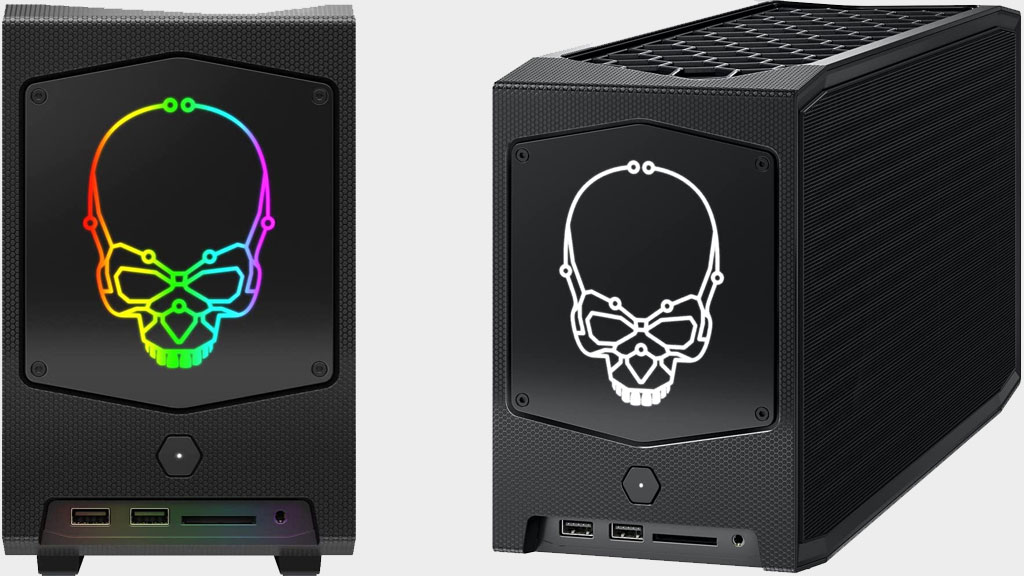 Right on schedule, Intel's NUC 11 Extreme mini PC, otherwise known as Beast Canyon, has launched to retail, but pricing out of the gate is well above what Intel announced this past July. At least on Amazon, anyway.

There are a few listings for Intel's top configuration outfitted with a Core i9 11900KB processor. The least expensive is a barebones kit priced at $1,770 (via FanlessTech), plus another $55 for shipping, by a marketplace seller. So that's $1,825 to start, and at minimum, you need to add memory, storage, and an operating system to get up and running. A discrete graphics card is optional.

Beast Canyon is a not a cheap product line, though the initial listings on Amazon carry an added premium, or early adopter tax, if you want to call it that. Or marketplace seller shenanigans. Whatever the case, Intel said in July that the Core i9 configs would start at $1,350, while Core i7 models would begin at $1,150.

Those price points would be for barebones kits that don't ship with any memory, storage, or an OS. Incidentally, pricing that is more in line with expectations can be found at SimplyNUC, which sells a Core i9 config with 8GB of RAM and 256GB SSD for $1,599, and a Core i7 model with the same supplementary components for $1,399.

SimplyNUC also gives the option to customize the setups with beefier hardware, including discrete GPUs (albeit they're way above MSRP, as in $999 for a GeForce RTX 3060). However, both models are on backorder, and it's not clear when either one will actually be in stock and ship out.

Best microphone for gaming: make sure you're heard
Best webcams: be seen while you get your stream on
Best capture cards: lessen the load with a dedicated card

Pricing and availability aside, Beast Canyon is an interesting product. It's a mini PC with an edge, built around Intel's Tiger Lake-B desktop chips. The top CPU option, an 11th gen Core i9 11900KB, is an 8-core/16-thread CPU with a 3.3GHz base clock, 4.9GHz turbo frequency (5.3GHz with Turbo Velocity Boost), 24MB of L3 cache, and a 65W TDP.

These NUCs come with a 650W power supply with 80 Plus Gold certification, and can fit dual-slot graphics cards up to 308.4mm (12.14 inches) in length. The PSU serves up at least enough wattage to handle a GeForce RTX 3070 or a Radeon RX 6800, and maybe higher, depending on the quality of the unit (we haven't tested one of these yet). And if you can actually find a GPU, of course.

The other neat thing is how these are built. A swappable Compute Element cartridge holds the motherboard, processor, RAM, and storage, making it possible for a wholesale change down the line, in addition to piecemeal upgrades. And it all comes packed in an 8-liter chassis measuring 357 x 189 x 120 mm (14 x 7.4 x 4.7 inches).

Neat as these are, the timing of their arrival unfortunately coincides with a shortage of GPUs. Even though they're optional, it's hard to envision paying relatively steep prices for one of these, and then leaning on integrated graphics. But, they're here, and I imagine they'll get cheaper on Amazon as more stock becomes available.

Suicide Squad: Kill the Justice League trailer has a bunch of callbacks to the Arkham games