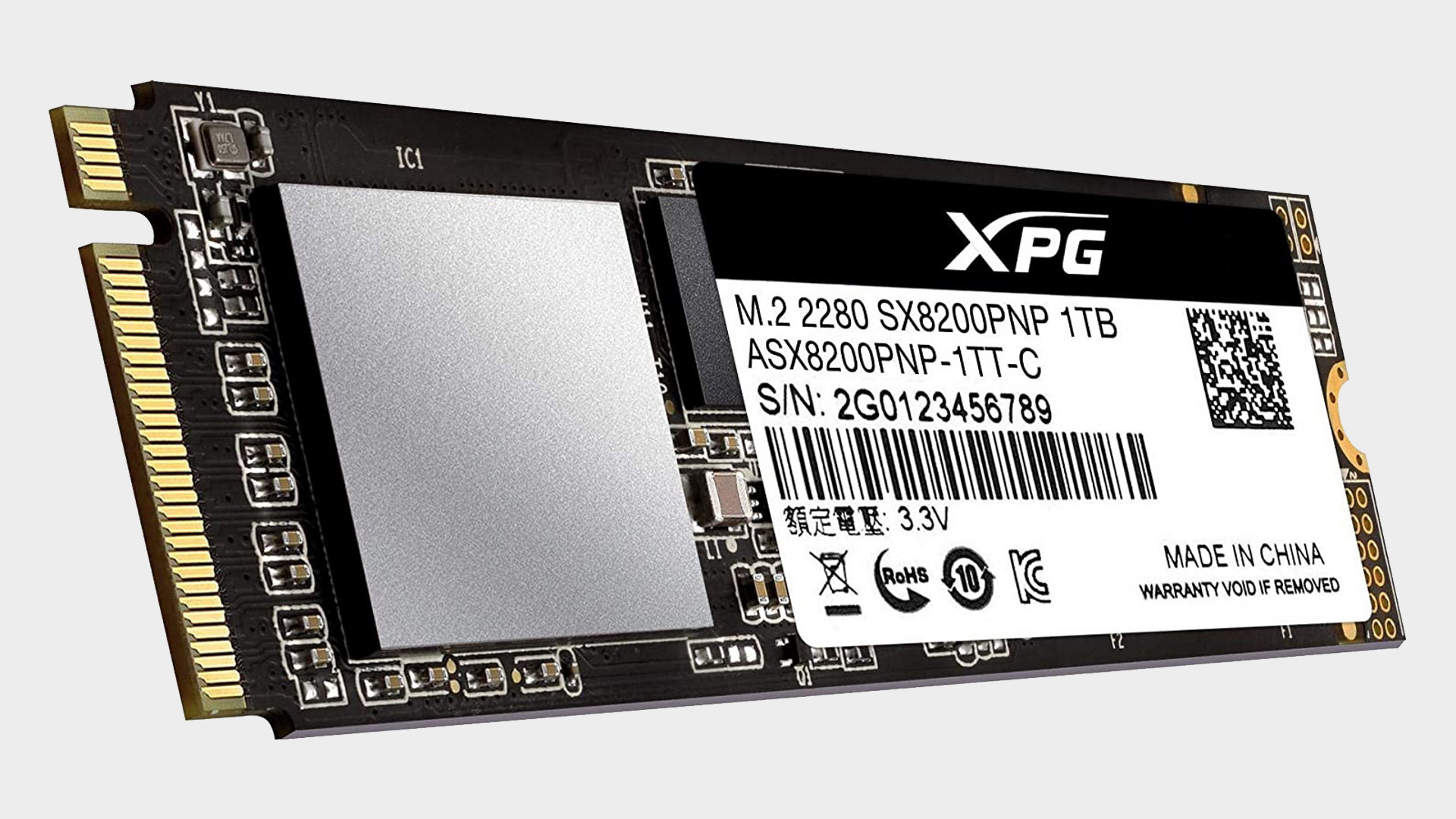 What’s the best way to achieve affordable solid-state performance? A slightly dusty old drive based on superseded high-end features? Or something shiny and new but with a more mainstream specification? The Adata XPG SX8200 Pro M.2 SSD, tested here in 1TB configuration, is a textbook example of the former.

First seen in 2019, it’s an intriguing alternative to new SSDs with the latest features like PCIe Gen 4 support but with their wings clipped to achieve a cost cut. Indeed, Adata can meet your needs either way with the Adata XPG Gammix S50 Lite offering the alternative route. More of which in a moment. First, let’s take a closer look at what makes the Adata XPG SX8200 Pro tick.

Memory wise we’re talking 1GB of 64-layer Micron flash chips. Micron’s latest memory chips are 96-layer, so as with pretty much all aspects of this 80cm M.2 2280 drive, this is not the very latest hardware. However, it is TLC or triple-level cell memory.

That’s one of the advantages of going with an older drive. Instead of going after, say, the very latest controller chipset features like PCIe Gen 4 support and then cutting corners by using much slower and less robust QLC flash memory, you can have decent TLC chips, just hooked up to an older PCIe Gen 3 controller.

Speaking of which, the SX8200 Pro is powered by the Silicon Motion SM2262EN controller chip. Back in 2019, it was SM’s latest NVMe controller and boasted various improvements, including a 50% boost to both random and sequential write speeds.

In the here and now, the SM2262EN’s specification still looks decent. It’s an eight-channel controller with DRAM support, runs a pair of ARM Cortex R series processor cores, and supports NVMe 1.3. What you don’t get, of course, is the latest PCIe Gen 4 interface. This is a quad-lane Gen 3 item.

Other features of note include a dynamic SLC cache mode, where a portion of the drive is operated in faster pseudo single-level cell mode, plus 1GB of DDR3 DRAM cache. Finally, the Adata XPG SX8200 Pro is available in a wide range of capacities starting at 256GB and scaling up to 2TB.

As for claimed performance, sequential throughput is very much in line with expectations for this class of drive with 3,500MB/s reads and 3,000MB/s writes. The IOPS or random access performance, on the other hand, of 390K read and 380K write IOPS is some distance behind the best PCIe gen 3 drives, with the likes of the Samsung 980 Pro and WD Black SN750 achieving over 500K IOPS.

Of course, the latest PCIe gen 4 drives often exceed 7,000MB/s for sequential performance and achieve as much as one million IOPS. But it’s the alternative approach to affordable performance represented by mainstream rather than high-end PCIe 4.0 drives, including Adata’s own XPG Gammix S50 Lite, that makes for the more interesting comparison.

That drive is available for very similar money, sports a PCIe 4.0 controller, albeit four-channel not eight-channel, and on paper delivers better numbers all-round, including faster sequentials and better random access performance.

But what about actual benchmarks and tests of real-world performance? In terms of peak throughput, the mass-market PCIe gen 4.0 option is a little quicker, but not to the extent that you’re going to be able to feel the difference. This SX8200 Pro kicks out 3.25GB/s reads and 3GB/s writes. The Gammix S50 Lite is only a little quicker.

Likewise, random 4K performance is behind that of the newer but more mainstream drive, but again only by a small margin. More of a concern is sustained performance. In our drive-filling internal file copy testing, the initial performance of 1GB/s drops off to around 500MB/s to 700MB/s after approximately 125GB of data. That’s the underlying performance of the TLC memory being exposed.

At around 650GB of data, performance drops again, fluctuating between 300MB/s and 600MB/s as the remaining TLC capacity limit is approached and data in the SLC cache is flushed and converted to TLC storage. At no point do we believe thermal throttling is a factor, with peak temps well controlled at 52 degrees centigrade despite the absence of a heat spreader or cooling block.

Game load performance, meanwhile, proves a moot point. With both options, you’re getting quick load times. Moreover, at 1TB for $130 (£100) at the time of writing, it’s nice to know you can have 1TB of storage and therefore sufficient space for a decent library of games installed on your primary OS drive.

All told, there’s little to pick between this legacy-spec PCIe Gen 3.0 drive and a mainstream PCIe Gen 4.0 drive at least in most day-to-day tasks. The question marks mainly centre on longevity and sustained performance. The SX8200 Pro’s 640TB of rated write endurance is nothing special and the way performance drops off with really large amounts of data isn’t impressive. On the other hand, you do get a healthy five-year warranty and that write endurance still translates into 350GB of writes each day, every day for five years. Few will need anything like that much endurance.

Ultimately, then, it all comes down to money. Pricing is obviously a bit of a moving target, but as we write these words the cost of the Adata XPG SX8200 Pro 1TB is pretty much identical to that of its Gammix S50 Lite sibling. While that remains the case, we prefer the newer drive. But it would only take a very small adjustment downwards for the SX8200 Pro to become the better value proposition.

If you're in the market for a new drive, be sure to check out our guide to the best SSD for gaming.