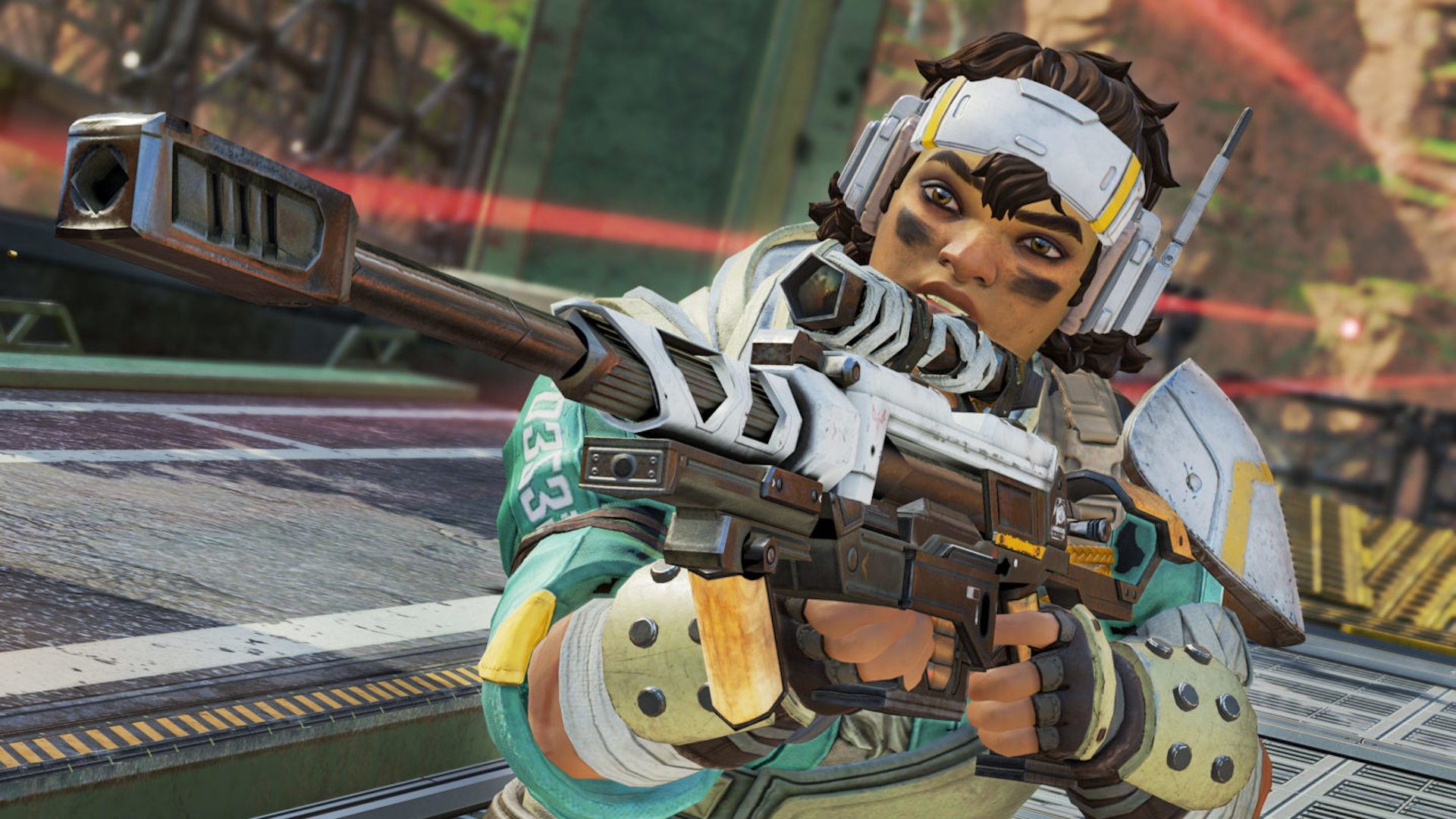 Apex Legends' latest season, Hunted, is out tomorrow. With it comes your usual helping of map changes, character balancing, and a new legend that may finally help me not suck at the game.

Her name is Vantage, and she's Apex's first sniping-focused character. While we haven't gotten hands-on with her yet, Respawn has shared a brief teaser and description of her abilities, including one perk that should make long-range shots a lot easier to land.

The ability I have my eye on there is Spotter's Lens. As a lapsed casual Apex player, bullet drop is one aspect of the game I've never been able to wrap my head around. You'd think after 10 years of playing Battlefield games that I'd be able to land a sniper shot, but Apex's constant mobility makes consistent accuracy especially tough. A bullet drop indicator could be the assist I need to finally become a competent squadmate. I imagine experienced sharpshooters are more excited by her Sniper's Mark ultimate that can essentially mark players for death. This sounds a lot like a long-range, ultra-deadly version of Zenyatta's Discord Orb in Overwatch.

We also shouldn't forget that one of the most powerful abilities in the game, self-revive, is also getting completely removed. Gold Knockdown Shields will now have the Guardian Angel perk, while Gold Backpacks get Deep Pockets, a new perk that lets users hold additional healing items per slot.

Hunted launches tomorrow! Get a look at some of the highlights from the update below, or click on the link to read the full patch notes ???? ????: https://t.co/WYd0PNoKdx pic.twitter.com/JZLaTqVXf1August 8, 2022

Elsewhere in the Hunted patch notes are a heap of weapon and character balancing changes. Fresh on the chopping block is Valkyrie, who's getting a major nerf to the VTOL jets that make her so popular among high-ranked players. Her powerful repositioning ultimate, Skyward Dive, is now both slower and lower, making it easier than before to pick her squad out of the sky before landing. Meanwhile, Newcastle is getting big buffs to basically every part of his kit, which leads me to believe he was underperforming during his debut season.

Check out the full Apex Legends: Hunted patch notes below:

Bocek Compound Bow
Damage at full draw increased to 70 from 60.
Tempo draw speed increased to 0.38 from 0.32.
Shattercaps pellet damage increased to 12 from 11.
Fired arrows can no longer be collected.
Arrows spawns have been removed from the floor.

Rampage LMG
Damage increased to 28 from 26.
Rampage comes with a Thermite Grenade.

LSTAR
Increased projectile speed.
Increased number of shots before overheat at base to 24 from 20.
Removed bright red flash when hitting non-armored targets.

Sentinel
Deadeye’s Tempo has been worked into the base Sentinel.

Arc Star
Reduced stick damage on armor to 10 from 40.
Remove aim slow on stick, remains on detonation.
Detonation damage increased to 75 from 70.

Caustic
Fixed gas ramping bug where transitioning from friendly to enemy gas would initially damage for more than intended.

Revenant
Death Totem will now show a placement preview when activated instead of placing immediately.

The maps rotating for public matches during Hunted are; Kings Canyon, World’s Edge, and Storm Point.

QUALITY OF LIFE
New Mode/Map name UI element on load screen and start flow.
“Winning” and “Champion” tags added to the scoreboard.
Added ability to use “tap” interact prompts when they conflict with “hold” (e.g. reloading near downed teammates is now a lot more reliable on controller).
Added flourish to the crafting materials in the top right of the HUD when they increase.
Added a flourish to items if they become craftable while in the crafting station UI.
Added accessibility switch for turning on and off TTS (Text-to-speech), defaulting to what your console or system has it set to (where available)
When dropping from the dropship, the location of the POI player lands in is now displayed.

BUG FIXES
Hipfire reticles now change size based on the FoV
Fixed bug where canceling a Lifeline revive would cancel it for other teammates also being revived by Lifeline.
Fixed bug where players could not deal melee damage to Caustic Gas Barrels or Octanes Jump Pads.
Fix for issue where the buy menu would close each time a teammate completes a purchase/and or closes the buy menu.
Crypto’s Ultimate now destroys Wattson’s Pylon.
Fix for issue where Crypto’s heirloom animation audio would play globally when using a survey beacon.
Fix for issue where players could sometimes get stuck while crouched between a Replicator and Black Market after crafting.
Fixed bug where players could not unlock the “Fully Kitted” badge.
Fix for issue for Legends losing functionality like meleeing, using an ability, etc, while mantling.
Fix for bug where players could not switch ammo types for the C.A.R. SMG.
Newcastle - fix for issue where Newcastle could get stuck in their Ultimate animation while riding a zipline.
Newcastle - fixed bug where throwables placed on a Mobile Shield would start floating after the Mobile Shield disappears.
Newcastle - fix for cases where players wouldn’t take damage from ordnance or activate Caustic’s barrels when positioned between a Tactical Shield and its drone.
Newcastle - fix for bug where throwable abilities placed on a Mobile Shield could float away after the Mobile Shield disappears.
Wraith - fix for bug where Wraith would still take damage in the Ring while phasing.
Fix for a reload bug with the Mastiff and 30-30 Repeater where players could not ADS until reloading animation was finished.
Fixed bug where Crypto’s melee animations wouldn’t show his heirloom while in third person.
Vending Machines in Big Maude now have buyer protection.
Fixed an issue that could cause some stuttering and framerate spikes on consoles, especially PlayStation 5 and Xbox Series X/S.
Fix for bug where the Dropship would sometimes spawn players outside the ship.
Fixed a bug where Heat Shields would disappear when placed under a respawn beacon, or mobile respawn beacon, and then the beacon was used.
Fixed a bug where Pathfinder’s zipline would be destroyed if placed on top of a respawn beacon and then the beacon was used.
Fix for cases when a Heat Shield could disappear when set under a Respawn Beacon that is activated.
Fix for a bug where Mirage decoys would not show up on scan for a few Legends.

Here's when Grounded 1.0 releases in your timezone