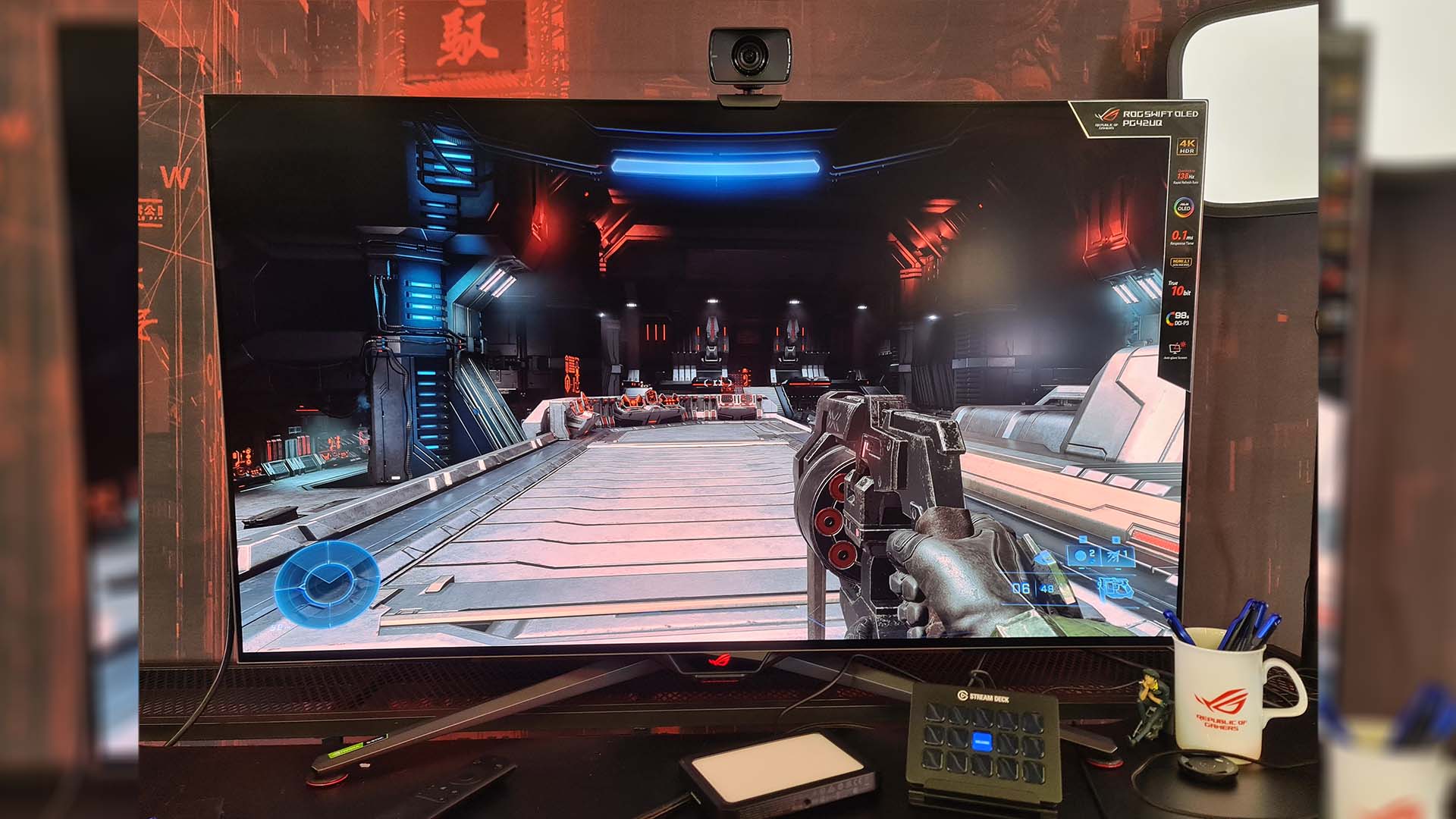 OLED panels are becoming a common trait in TVs, but why aren't there many gaming monitors with the exciting panel technology? Don't fret, Asus may have two new products to try and push OLEDs onto our desktops: the ROG Swift OLED PG42UQ and ROG Swift OLED PG48UQ.

These impressive new OLED gaming monitors are set for a release towards the end of the month, however, Asus has allowed us to take a look at them in-person ahead of time to see what all the fuss is about. And I have to say the panel is very impressive, made a little more so by its ultra-slim and nearly bezel-less frame.

First off, the key specs. Of the two new OLEDs headed out from Asus this month,  the only difference is their size: the PG42UQ is a 42-inch panel and the PG48UQ is a 48-inch panel.

It's the 42-inch that I'm most interested in. That's already a seriously massive screen but does just about engage your complete vision from a normal seated position at a desk. The 48-inch, on the other hand, really is rather massive. That's much more of a living room-style gaming monitor than one intended for the desktop, though I'd behove you to try it nonetheless.

Both screens share the same core functionality, at least. Each is built to offer up to 800 nits of brightness (which was originally touted as 900 nits but later revised down) with a contrast that you really can only expect out of an OLED. That means near-perfect blacks and a real depth to the image on display.

Each OLED panel is rated to 0.1ms response time and 120Hz refresh rate, though you can push that up to 138Hz via overclocking and a DisplayPort connection. They're also noted as G-Sync compatible. Asus says long running times and continued use at these sorts of speeds is no issue for these monitors; while they're extremely thin around the edges, I'm told the chunky heatsink in the back actually keeps them running relatively cool.

Each panel comes with a selection of HDMI 2.0 and HDMI 2.1 ports, which means you can hook up a modern-day console to this panel and get the most out of it. That's going to be particularly handy on the larger of the two screens, as this could be a realistic stand-in for a TV.

I tried out a couple of laps in a sim rig with three of these screens loaded into it— a mighty experience that made me wish I had £30,000–£40,000 to take it home with me. In a more realistic gaming scenario, I blasted a fair few grunts in Halo on a single monitor gaming setup and the picture was thoroughly impressive. From the inky blacks to the swift response, it all gelled together very nicely indeed. I didn't notice a drop of haloing nor any backlight bleed during my hands-on time, though the room was relatively bright so I couldn't quite test it at the extremes. Similarly I never noticed much ghosting, but we'll have to take a closer look to properly verify.

Yet these look to be two very impressive gaming monitors, and unsurprisingly they come at a premium price. The ROG Swift OLED PG42UQ will launch for around £1,400 and the larger ROG Swift OLED PG48UQ for £1,500 (US pricing not confirmed). Now that's not much of a price difference for another six inches of screen real estate, but again I do think the 42-inch option is the better buy for a desktop PC setup.

Will these two monitors be able to make a bigger OLED-shaped dent in the PC gaming monitor market? Well, we hailed the Alienware 34 AW3423DW QD-OLED as the arrival of OLED on PC, and one of those will set you back £1,099, or $1,299 in the states. These two Asus models are asking more than that, so we'll have to see. At the very least the arrival of Alienware and Asus into the world of PC OLEDs is a sign of things to come—I have a feeling if these two are doing it then we'll see a whole lot more OLEDs designed for PC make it to market in the second half of 2022 and into 2023.

Bring on CES, 2023; there's sure to be a heap of OLED gaming monitors at the Las Vegas tech show if these recent releases are any indication.